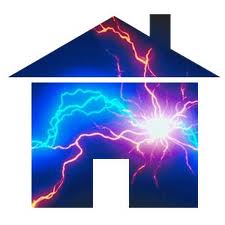 With the high winds and the recent stormy weather we, at Haskin Electric, are concerned about your sensitive electronics. We know that most homes are filled with electronics. Your computers, TV, Washer and Dryers, Stoves, Microwaves, etc….  Our homes are filled with them. These devices can be and are easily damaged by common power surges in your electrical, telephone, and cable lines.

What is a power surge? A “power surge” is actually a power disturbance of a spike that momentarily disrupts the electric supply. The normal 120/240 volts of electricity feeding your appliances can jump to more than 400 volts – and in some cases, all the way up to 6,000 volts. This can all happen in the blink of an eye. But more common are low level disturbances which are harder to detect. About 60 percent of surges are caused by routine operations, such as washing machines and dishwashers switching through their normal cycles.

I just read a story on line about a home owner who had a thunderstorm at their house with lots of lightning. The next morning their two year old washing machine went on the fritz. The repairman told them both circuit boards were fried and it would actually make the most sense to replace the $800 machine rather than fix it. How much can you afford to lose? It only takes a lightning storm near your home or high winds to create a high-energy electrical surge that can enter your house and destroy your appliances, TVs, stereo equipment and almost all other modern electrical products.

Don’t limit your protection to only a surge strip; protect the entire home with a whole house surge protector.  Contact us and we will be glad to discuss how we can be of service to you. Mention this website post and receive a 10% discount on your next service call.  We are located at 5317 NE St Johns Road, Vancouver Washington, 98661.